9/23/19 – Weekend in Review: Moonshots Galore, The Times Are A-Changin’, and All the Clinches

Posted on September 23, 2019 by Marea Anderson Leave a comment 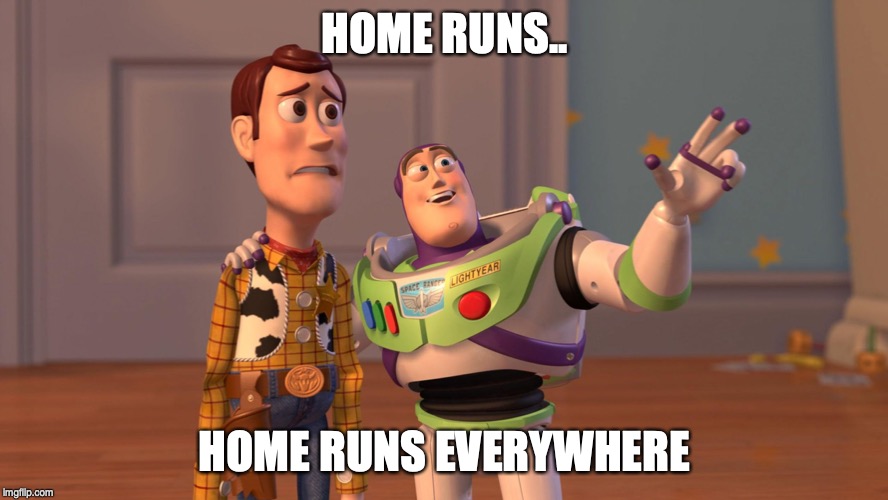 With 6,525 home runs and counting, 2019 has seen so many records shattered when it comes to moonshots. The regular season record of 267 team home runs (set by the Yankees just last year) has now been broken by FOUR teams – the Yankees (298), Twins (297 – the first to break the record this season), Astros (277), and Dodgers (268). By season’s end on Sunday, we could (will) have two teams to have 300+ home runs. Before last year, the record had been held for 21 years by the Mariners at 264. Needless to say, this season’s been about as fun to watch the ball fly out of the park as it was during the Steroid Era (unless you’re a pitcher).

Will this year be marred in the future as the beginning of the 2nd Steroid Era? Maybe. Or maybe the ball is juiced, like Justin Verlander claims. Or maybe, teams were seeing opposing players proven to smash homers in their own ballparks and decided to add these players to rosters (ahem, Nelson Cruz/Target Field). Any way it shakes out, we’ve seen some amazing baseball being played this year.

The season may be winding down within the next few days, but this past weekend didn’t disappoint when it came to memorable home run performances. Let’s highlight the best of the best, shall we?

I already covered little Petey’s 50th homer of the season on Saturday, so I won’t beat a dead horse. You can click here to read more. But seriously, he’ll likely break Aaron Judge’s rookie record of 51 if he can hit two more this week.

I’ll be writing more about this particular Astros game below, but George Springer played a huge part in the 13-5 beatdown of the Angels on Sunday. For the first time in his career, Springer had three home runs in a game. The lead-off hitting All-Star smashed one out in each of his first three at bats, bringing his season total up to a career-high 38 homers. He’s just one bomb behind Astros 3B Alex Bregman, who leads his team with 39. And remember the other day when I wrote about the Twins breaking a long standing record with having 5 players having 30 homers or more? Well the Astros might also have 5 by season’s end if their DH Yordan Alvarez manages to get 3 more this week. (1B Yuli Gurriel and 2B Jose Altuve each have 30.)

Nelson Cruz hit his 40th home run of the season on Sunday. Oh, and it just happened to be his 400th career shot as well. The 39-year-old nap-taking Boomstick turned 2019 into his 4th season with 40 or more home runs (and he came so close in 2017 with 39). He could continue to play next year if the Twins pick up his $14 million option for 2020. He takes pride in taking excellent care of himself, so it’s not beyond the realm of possibility for him to play a couple of more seasons in a DH role. Congratulations, Boomstick!

The Times, They Are A Changin’

I already told you guys about San Diego Padres manager Andy Green getting the axe on Saturday. In that same post, I mentioned that many other managers would likely be on their way out at the end of the season. Well, before the Royals have a chance to fire him, manager Ned Yost announced this morning that he’ll be retiring after his team’s season ends on Sunday.

Yost has been the HBIC in Kansas City since 2010, and led his team to an impressive World Series win in 2015. This fact still blows my mind, since most of his years as manager for either the Royals or Brewers were losing seasons. In his 6 seasons as the Brewers skipper, they finished 3 with a .500 or better record, and in 10 with the Royals, they finished just 4 seasons with a winning record. The Royals are finishing back-to-back 100+ loss seasons, so it was likely he wouldn’t have been asked back for an 11th season at the helm anyway. He’ll end his managerial career with a record of 1201-1338.

Among other guys on their way out the door is Yankees veteran pitcher CC Sabathia. The 39-year-old hurler said goodbye to fans in New York yesterday during an emotional tribute. He started his last game on September 18th, lasting 2 2/3 innings, giving up 5 hits, 2 walks, 2 runs, and striking out 4. He’ll likely be used in the bullpen during the postseason, though he’s been plagued with nagging knee issues that put him on the IL multiple times this season. Happy trails, CC!

The Astros, Yankees, and Braves all clinched their divisions over the weekend, and there are just a few spots left to claim with just 6 days left to play in the regular season.

The Astros put an exclamation mark on their phenomenal season on Sunday by clinching in a game that saw the aforementioned George Springer hit 3 home runs and earning Justin Verlander his 20th win of the season. This is the third year in a row that the Astros have won the AL West and have won more than 100 games in a season. Remember back in 2013 when they won just 51 games? Seems like a lifetime ago.

The Yankees are tied with the Astros for wins at 102, and they clinched the AL East on Thursday. Surprisingly, the Goliath of the MLB hadn’t managed to win their division since 2012. They’ve made the post season a few seasons between, however, nabbing a Wild Card spot in 2015, 2017, and 2018. They last won the World Series in 2009 – for the 27th time. Yawn.

The Braves clinched the NL East on Friday night, and for the second year in a row, they jumped into the fountain in centerfield of the gorgeous Sun-Trust Park:

They started this tradition after winning the division last year, and decided to jump back in after their 6-0 win over the Giants.

With these three teams clinching their playoff spots, all that remain are the AL Central, NL Central, and Wild Card spots. The tightest division race is the AL Central, where the Twins hold a four game lead and a magic number of 3. Both teams have fairly easy schedules for the next 6 days, so it’s basically Minnesota’s title to lose. The NL Central is separated by 3 games with the Cardinals over the Brewers. The Cards’ magic number is 4. The Cardinals face the Diamondbacks and the Cubs, while the Brewers face the Nationals and Rockies. This race will be a bit tighter, with the Brewers refusing to die, despite losing reigning MVP Christian Yelich to a broken kneecap.

The Wild Card races are going to be down to the wire. Oakland will likely land the top spot in the AL, but the 2nd spot will be tough to call between the currently identical records of Tampa Bay and Cleveland (or the Twins if they completely shit the bed this week). The National League will likely be going to Washington and Milwaukee (or the Cardinals, if they hit the skids this week). The Cubs and Mets aren’t officially eliminated, but unofficially, they’ll be watching the post-season from their couches at home.

Enjoy this last week of the regular season, baseball fans! If your team is out of contention, find a bandwagon to jump on. And if you’re lucky enough to root root root for YOUR home team in the post season, best of luck! (Except you, Cleveland fans. You know I’m a Twins fanatic.)

What say you, readers? Leave a comment below. Cancel reply

Today’s Games and Scores – Scroll To see all the games

Unless noted, all articles written by Marea Anderson. |
Photos and other media credited when available.

Congratulations to @alyssanakken, the first ever f

A DIY no-sew mask I made from a @Twins #HomerHanki